Listen to one of the Audio Visual/Tech industry’s most popular podcasts – a show with commercial and residential technology professionals known as “The Crew” who bring conversation with guests in and outside of the AV industry about tech, trade shows, trends, experiences, marketing, branding, social media – and life.

Of course, most of the shows that Katye McGregor Bennett and I host are strict to technology, or marketing, social media and such. Trade show times are our biggest shows of the year, as evidenced by the recent CEDIA Expo podcasts – all three of them that Katye most adeptly put together and hosted. Crew member Kaleo Lee, along with new Crew member Matt Montgomery joined for Episode 96, one of our best trade show episodes – where we also met Brian Pagel, Giles Sutton and Toni Sabatino for the first time on the show. Alex Capecelatro, CEO at Josh.ai also joined us, and we believe he holds the record for most The AV Life appearances now (we also caught him programming on the previous episode). Frank White at Weld2 & Stay Tuned, Brad Hintze at Control4, and Emily Harger at Séura rounded out the guest list – on the last “Road to CEDIA” show before CEDIA Expo.

As all went off to CEDIA Expo, a show theme I had been planning for a long time (almost a year), to focus on AV people, their families and stories (as I of course have my own) finally came to fruition last week – and I have to say that the whole show clinched my original idea. It really warmed some of the people who did it as well – you can hear it in their conversation. There was excellent complimentary talk of the young people on the podcast, which I like most of all – they are our future of course. We had a little fun too, especially with my daughter and her somewhat out-dated devices. Well, she is a lawyer… (OK, that’s on me).

My good friends John Greene and George Fournier joined (John with his son Mitch, and George with ten year old son Sean), Scott Meyer of Electrosonic, who I met last year at InfoComm, joined daughter – and returning Crew member – Taylor Meyer. We were also joined by Meredith Shubel who appeared on Convergent Week Episode 9 (with her sister Laura) –  Laura was supposed to join too, however she got caught up in meetings at CEDIA Expo. One other guest, very special to me of course, was my daughter Linda who talked about the interactive commercial technology product she grew up with in our house – that along with the aforementioned tech that she currently uses. We also talked some business to go along with the central theme.

Here we are (Linda is off camera):

(Thanks to George for the screenshot)

The AV Life – it’s all about the AV family, their families, the tech… and Life. 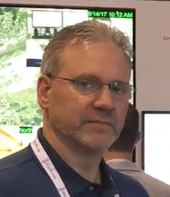 With over 20 years in audio visual integration and IT/computer sales and consulting, Corey Moss is the owner of Convergent AV. Corey writes for the publication and hosts/produces podcasts – The AV Life, Convergent Tech Talk and Convergent Week. He has written for numerous industry publications about AV, IT, unified communications and collaboration (UCC), cloud and software, IoT, cybersecurity and more. He has also conducted interviews with AV and IT executives and global influencers. Find him talking about a whole lot of things, tech and otherwise. On LinkedIn https://www.linkedin.com/in/mosscorey/.