The Washington Department of Transportation’s (WSDOT’s) very first Traffic Management Center dates back to the late 1960s. Based in Seattle, it held just a few monitors to control the operation of the Interstate 5 express lane. Come 1992, WSDOT’s center was taking up an entire building, with continued exponential growth.

By 2015, with a growing system of cameras and detection devices, WSDOT outgrew its previous space and decided to embark on the construction of a dedicated building for its statewide traffic monitoring services. For the new Traffic Management Center, the agency wanted an updated monitoring set-up for its traffic camera feeds with a goal of improving awareness of current conditions and allowing for timely and efficient intervention when needed.

With approximately 750 cameras to keep an eye on, a video wall was a crucial part of the building’s design. Incorporating a large number of monitors would allow the team to pull up a plethora of highway accidents, traffic jams, tunnels, and more that need to be viewed simultaneously and at a moment’s notice.

Due to budget constraints as a state organization, the agency needed a solution that could be updated as needed rather than requiring a large overhaul with crippling costs. Therefore, a video wall with individual monitors, rather than a monolithic video wall, was a must for the department.

Based on the design of the room where the video wall would be constructed, WSDOT had specific needs in place for the new set-up. Phase 1 required a video wall comprised of 90 monitors meeting the following requirements:

Inspired by the need for collaboration and efficiency, phase 2 of the project would focus on the following requirements:

WSDOT did its due diligence with a thorough review of numerous vendors, selecting Diversified as the integrator of the project based on the company’s adaptability and reputation for overcoming any integration challenges with excellence.

The team selected NEC for its displays because they wanted to use individual monitors to allow for the purchase of new hardware as needed, rather than using a monolithic wall. They were looking for clear estimates of the cost of the wall, which NEC allowed for. Furthermore, use of ultra-thin bezel displays was crucial to allow for looking at single images across multiple monitors.

After those selections were complete, WSDOT next sought a mount manufacturer. Alerted of Peerless-AV’s solid reputation by several manufacturers, including their current vendors, and with ease of use and adjustability being musts for the project, WSDOT looked to Peerless-AV for the solution.

While most mounts on the market require the use of tools, Peerless-AV’s SmartMount® video wall mounts, such as the DS-VW765, offer simple, tool-less micro adjustments at eight points. Displays and mounts sit flush against the wall for a clean side appearance, easily overcoming uneven walls. Tedious calculations and onsite guesswork are also eliminated for installers as the mounts offer reusable display-dedicated wall plate spacers.

For ease of service, the mounts are equipped with a quick-release function that allows installers easy access to displays in recessed applications that would otherwise be hindered. To prevent unintentional pop-outs or tampering/theft, the quick-release feature can be disabled using a locking screw.

These features were key reasons why WSDOT selected Peerless-AV. The department needed to maximize the number of monitors used in its layout and Peerless-AV mounts provided the optimum setup for video walls – allowing displays to converge with no gaps or uneven edges. Peerless-AV mounts’ micro adjustments at eight points left WSDOT confident that the monitors would be aligned. Furthermore, with a concern about serviceability, the mounts’ pop out mechanism and kickstand support left the department assured that they could self-service the system quickly and easily.

For stage two of the renovation, the department also used Peerless-AV mounts for a 3×4 video wall of 46″ displays, driven by a high-end Barco video processor. This video wall allows personnel to grab a video image, or images, and move them from an individual display to the video wall and expand the image for more in-depth review.

Barco’s TransForm N solution and CMS software enhances situational awareness and collaboration in the control room, allowing operators to connect, configure, and display information in the most meaningful way to make faster, better decisions. Key benefits include easy and timely access to data, easy sharing within and beyond the control room, and the creation of user-defined perspectives.

Phase 1 went into operation in 2015. It included ninety 46″ displays that were integrated into the new Traffic Management Center space at precise locations. Video feeds to the ninety displays are from the statewide traffic management cameras.

Phase 2 was installed later and completed in March 2016. It added the 3×4 video wall of the 46″ displays, driven by a high-end Barco video processor.

The video wall for the integration was made from steel studs on 16″ centers that are overlaid with 16-gauge sheet metal and subsequently overlaid with 5/8″ drywall.

Diversified measured the walls, including the locations of all power and data outlets. Then, the Peerless-AV mounts were placed to evenly space the monitors and create equal vertical and horizontal gaps between the monitors.

The project was a success due to the ease of use, installation, and serviceability of Peerless-AV’s mounts. The DS-VW765-LAND’s latching, accordion feature, kickstand, and micro-adjustments were crucial in terms of installation and continued maintenance.

“The installer’s team, in addition to my own, like the mounts,” noted Michael Forbis of WSDOT. “I have personally taken down and installed a few monitors. The NEC P463 weighs about 40 lbs. These mounts make dealing with the P463 a breeze.”

The new Traffic Management Center allows the department to easily care for its new technologies in addition to increasing job efficiency. The new video walls allow for seamless and constant views of traffic conditions and instant enlarged views of areas of interest, allowing for quick and efficient decision-making. 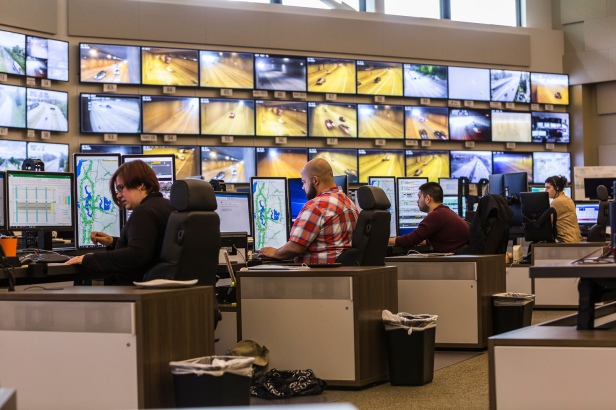 Peerless-AV, a Peerless Industries, Inc. company, is a leading designer, manufacturer and distributor of audiovisual solutions. From its award-winning mounts and wireless audio systems to indoor/outdoor kiosks and the industry’s first fully sealed outdoor displays, Peerless-AV has aimed to fulfill both integrators’ needs for ease of installation and service, and end-users’ dreams in residential and commercial applications for the last 75 years.