Infocomm was showing a softer side this year.  The expo hall floor was oversaturated by collaborative software.

Two years ago, I would have stood in one of those booths and told you that the future of collaboration is in the cloud and easily accessible.  I still stand by that mantra, however, two years ago the option were limited and there wasn’t much of a market.  The need was still evolving, and organizations needed time to migrate strategy.

This year, Infocomm showed a saturation of software products, each tackling the beast of collaboration from their own angle, and many with a cloud option.  So what follows arebrief synopses of what’s out there and what it does.

The Ideation and Collaboration Tools [in no particular order]: 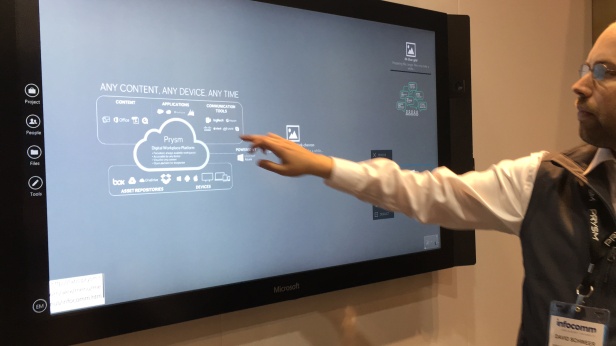 Prysm’s story revolves around the bridge from device to presentation.  Director of Product Marketing David Schweer showed me around a booth where every screen, from mobile device to the impressive 190” tiled Prysm wall, displayed the same project.  Each screen itself a portal to a collaboration session in which the whole booth participated. “With collaboration, it’s all about an initial idea that needs an outcome,” said Schweer.  “Whether you are on a personal device or in a room, ideas can be shared quicker and reach outcomes easier.”

Prysm turned heads in these last couple of months because it has finally started to certify third party displays.  Avocor and Planar are early partners, and Prysm also showed a project on a Microsoft Surface Hub.  They are looking to build on a story on interoperability.  Schweer mentioned a desire to move out of being known for their epic tiled interactive walls, and become a more true to form software company. 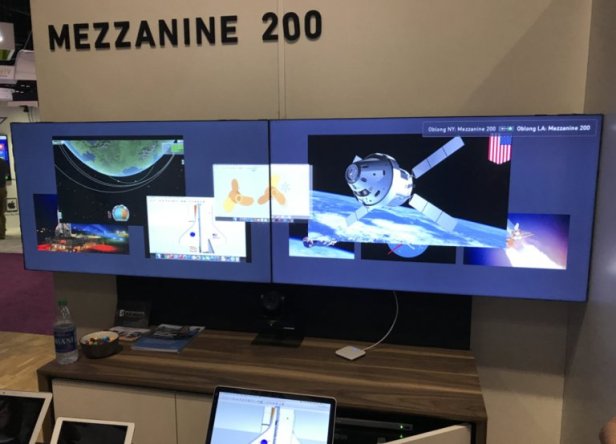 Oblong’s Mezzanine platform is coming at projects from a different perspective but ending up in the same place.  Mezzanine is looking to connect rooms in various locations with a fully specified hardware solution that utilizes the Oblong IR wand technology, rather than interactive displays.  Oblong solves the very real problem of climbing over furniture to interact with content.

Oblong has integrated some spiffy features that include voice control through G-Speak, combined with an IBM Watson integration, users are only a question away from all of human knowledge. Also, and maybe more valuable over the long run, Oblong has released different sized investment options for their systems.  Rather than the uber-slick, 6-display Mezzanine 600 system as an entry point, users can start with the smaller, still effective, and more easily deployed two-display Mezzanine 200 series.

Bluescape has partnered with more display partners and could be spotted at several points of the floor.  Bluescape’s focus has always been on interoperability and the seamless fit into any system standard.  Bluescape positions itself as a platform that drives design and ideation decisions, and they’re certification model allows them to provide a solution for any budget. To date, they’ve approved Dell’s new interactive display line, the Microsoft Surface Hub, Optika, Planar, 3M, Multitaction, and Avocor.

Bluescape, which is strictly a Software as a Service product, has been doing cloud longer than any of the other players in this space and has become focused on the solutions that can be built off of its use cases.  Device agnostic, poly-display compatible, and interoperable, Bluescape was an Easter Egg scattered throughout the show floor.  Bluescape’s value is in their mostly complete detachment from requiring hardware, instead allowing the cloud-based workspace to be the point of collaboration and always accessible.

Nureva’s Span system has grown by leaps and bounds this year.  In speaking with Channel Manager Ryan Blomfield, I learned that Nureva has joined the interoperability movement.  By partnering with Avocor, ELO, and still offering its interactive short throw projector, Nureva is creating a means to more easily deploy.

Nureva is driving home a story around fostering design thinking by creating easily deployed interactive spaces.  The Nureva workspaces do not have the number of features that the other products on this list have, but because Nureva keeps the core of its product pure it is more easily adoptable, which could prove to be its best value over time.

T1V has been looking to develop a niche within higher education.  T1V’s ThinkHub solution is interoperable with different monitor types, including a white labeled T1V interactive display.  Interactive touch mixed with a way to add direct content via a mobile app, a desktop client, or direct HDMI inputs.

Director of Sales and Marketing Adam Loritsch was also very excited about the new ViewHub system, which creates a Leader/Follower relationship between four different instances.  ViewHub will be utilized in an educational environment where small groups can collaborate, and the instructor can easily bring their workspaces [up to four] to her master display for wider group discussion and collaboration.

Multitaction sounds like they’re finally ready to move Canvus out of Beta.  MT has even started moving the collaboration tool that it’s developed outside of its premium and pricey Multitaction MT555 display and display walls.  The Canvus software is spiffy and can connect in a private or public cloud.  MT is still the smallest bezel in interactive right now, and the best experience in a large wall tiled environment, but I saw Canvus running on a Surface Hub, which makes me think that MT is ready to jump feet first into its collaboration software play.

The big boys and their commodity offerings:

The Surface Hub is a PC running Windows 10 Team stuck inside a very nice Perceptive Pixel interactive display and with some integrated cameras.  The Surface Hub is positioned as a collaboration tool, but it’s as strong as the usage of the tools that run on it.  The PPI display is absolutely gorgeous and super-responsive.  Many of the collaboration technology makers above have found a way to run on the Surface Hub hardware.

Microsoft seems to be positioning itself as an enterprise marketplace for apps, in comparison to some of it’s competitors’ focus on consumer marketplaces.  For the right organization, every Surface Hub can be a wormhole that transports teamwork across the digital ecosystem.  But, by allowing the other software makers a platform thorough which they can distribute their stuff on the Surface Hub [auxiliary video inputs, the Windows marketplace], Surface Hub can be be a powerful standalone hardware tool.

This was my first interaction with the Jamboard.  I was impressed.  Sure, right now the software is limited, and it looks more like a digital whiteboard than a sophisticated collaboration tool.  But it just came to the market, and the hardware is very impressive. The tools that are available currently on the Jamboard through G Suite will strongly support some of the design thinking processes that collaboration tools traditionally consider as their core use cases.  And let’s not forget that at a easy to digest price tag, it’ll be easily purchased in higher ed and by small design firms — two organization-types in which Google Enterprise thrives. 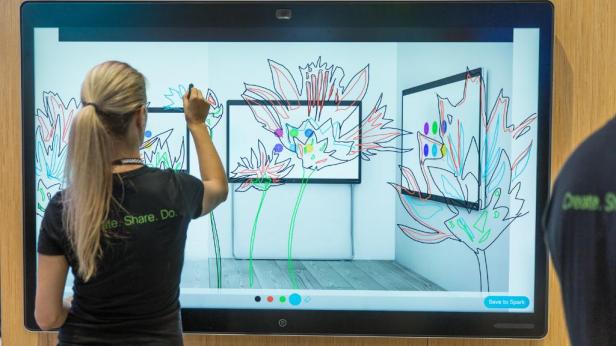 This was also my first time interfacing with the Cisco SparkBoard.  In a Cisco environment, where Cisco is the standard UCC platform, Cisco can be valuable. 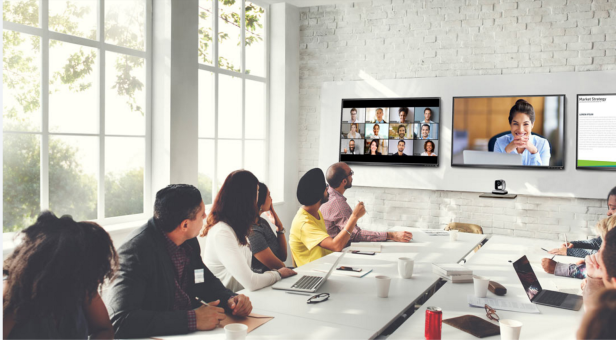 I am including Zoom.  Zoom is a Software as a Service.  Zoom’s Zoom Room is Zoom’s answer to a standard videoconferencing room.  The Zoom Room is basically a small form factor computer with a USB camera and some USB table mics attached.  Also an app on a tablet to control the whole thing.  This system can be, like, 90% less expensive than the more traditional videoconferencing room systems, easier to use, and capable of connecting people anywhere.

I am including Zoom in my “Big Boy” category, because Zoom is legitimately and actively blowing up the videoconferencing segment, and delivering on the almost half-decade old promise of VideoConferencing-as-a-Service [aka Codec-in-the-Cloud].  The simplicity of use and deployment, plus some choice strategic partnerships, have propelled Zoom into the realm of the other major players on this list.

Here’s some of the unsung things that will enable the scalability of the various types of interactive systems above. 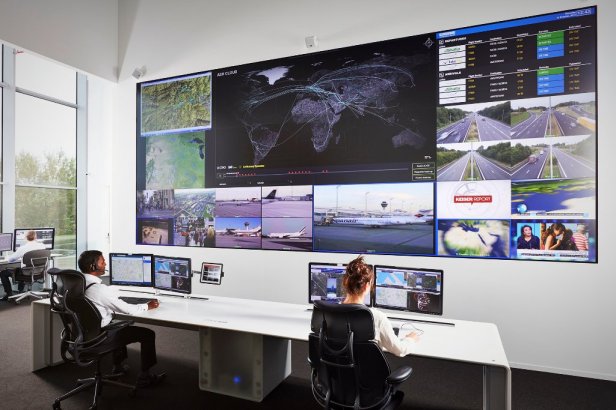 Essentially a GUI for control rooms [with a little bit of signal processing hardware]. Barco is answering the problem of intuitive UI and quick source signal switching.

Dycap has this really interesting software that can automate motion tracking on a camera.  An easy client-based UI will support any broadcast space’s video strategy.

Icron’s smart and sensible Raven line of USB and DisplayPort extenders can do 4Kp60 200 meters over fiber. [Finally!]

Haivision – secure encoder/decoder video broadcast over IP.  Also a content hosting platform. Meetings and broadcasts that are captured finally have a place where they can be accessed and serve the value they’ve meant to have.

#Collaboration is a legitimate market segment.  Amongst the solutions above, various display and interactive technology vendors are building out products that will support it.  Dell, Avocor, Planar, 3M.Flat Frog, PQ Labs, NEC, Baanto and many, many more manufacturers are starting to capitalize on the promise of interactive collaboration. Each display, each software, each packaged solution has its own need for evaluation against individual use cases, but with plenty to choose from, there’s bound to be something that fits in any ecosystem.

Ruben Romero is the Managing Director for TAD Associates, Silicon Valley – a Technology, Architecture, and Design consultancy. He has more than 15 years experience in collaboration technology in support, sales, consulting, and project management.

Find out more about Ruben on LinkedIn.

One thought on “Interactive Collaboration at InfoComm 2017”