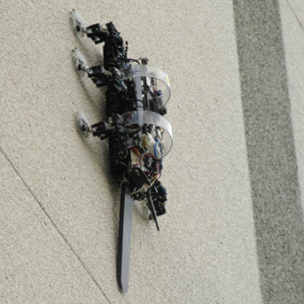 Adam Tank has an undergraduate degree in Microbiology & Molecular Genetics. After his first year in the MBA program at Kansas University, he was selected to be a Summer Associate in GE’s Experienced Commercial Leadership Program (ECLP) where he helped launch an eCommerce site for GE Water. He is currently working on his startup, Industrial Optic, focused on building robots small enough to fit into water pipe entry points – his idea for this was selected by GE in a special competition.

Taylor leads the discussion with the guests, talking about robotics and more. She begins with Adam asking about his efforts in creating these special robots (which made him a winner in the GE competition), along with building his startup company. He talks about STEM, and there’s even some AV talk here.

Taylor talks with Jim, who has been an exceptional influence for her as a lecturer at Iowa State University, about his being the advisor of the Cyclone Space Mining program and robot design for usage in space. He also talks about the annual competition that Iowa State competes in. Taylor, who is the Outreach Coordinator, talks about her start with the program almost a year ago, where she was discovered by many people in the AV industry who joined in to try to help her win the competition (she placed second).

Taylor also talks about her overall experiences with Adam and Jim, who talks about mentoring and outreach as well. Then in the second part – as for those robots – Taylor tells us all about her career aspirations in robotics, the graduate school she’s looking to attend (in the Boston area), as well as the “dream company” which she hopes to work for one day (referenced by the two robot photos on this page).  Another terrific conversation with Taylor, Adam, Jim, Corey and Katye.

Read about Adam Tank: From Corporate Entrepreneur to Founder in a Year

So sit back, plug in, listen to a special episode on robotics, space and more as we live…

Note: Apologies there is a bit of noise in spots — robots?

2 thoughts on “The AV Life Episode 28: Attention – This Podcast Has Been Taken Over By Robots”